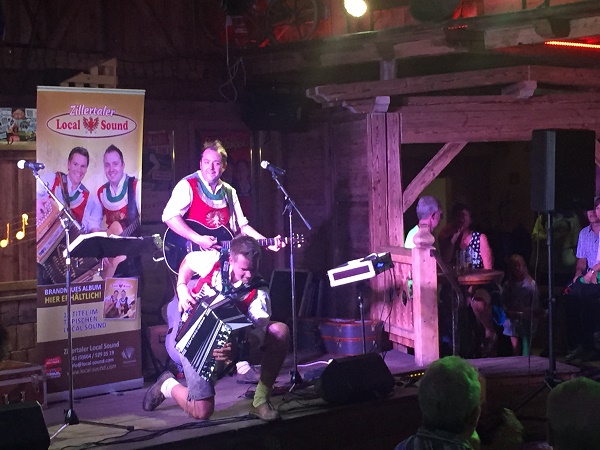 In Austria there is a rich selection of folk music.

In the Zillertal, for example, – the valley of folk music no. 1. Here, the old and more modern folk music lives side by side. If you want to catch live music during your visit to Austria, it is by far the greatest opportunity in the summer. Parties and festivals are held all the time in most areas. We have good experience with the Zillertal, especially Mayrhofen. In recent years, Gasthof has hosted live music by famous Ziller speakers throughout July in its Brücknstadl. This is, in many people’s opinion, also the best après ski resort in Mayrhofen. Don’t be surprised if the accordionist or fiddle player goes on top of the tables while he’s playing.

One of our favourites, which we have by the way, been given the honor of listening live is Zellberg Buam. Note the suit, which is a hallmark of gamemen from the Zillertal.
Or how about Die Jungen Zillertaler ( A little more commercial – a hit on après ski in Austria)’

We have also been to the so-called Früschoppen, a kind of morning party on Sundays. We met a good event in St. Oswald, the day after the live broadcast from ORF with a well-known TV program called Wenn Die Musi Spielt. This Sunday it was Die Edelseer who played. We made a little film from there:

We use cookies on our website to give you the most relevant experience by remembering your preferences and repeat visits. By clicking “Accept”, you consent to the use of ALL the cookies.
Cookie settingsACCEPT
Manage consent

This website uses cookies to improve your experience while you navigate through the website. Out of these, the cookies that are categorized as necessary are stored on your browser as they are essential for the working of basic functionalities of the website. We also use third-party cookies that help us analyze and understand how you use this website. These cookies will be stored in your browser only with your consent. You also have the option to opt-out of these cookies. But opting out of some of these cookies may affect your browsing experience.
SAVE & ACCEPT