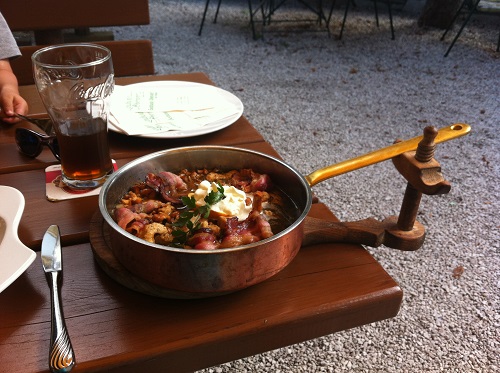 Austria is known all over the world for its food art. The country has taking good care of its traditional fare, and in the mountain areas it is heavy peasant food that applies – often with the use of pork. If you come down to Vienna, it is the old cafèhus traditions that prevail, and many have probably heard of Apfelstrudel and Sachertorte.

Have you seen guests who are served the food in a frying pan, as in the picture above? Wondering which dishes are served like this? Look for the word “pfandl” or “Pfandel”. A collective term for these dishes is “pfandelgerichte”, which translated into Norwegian means pan dishes.

For those of you who love Austrian cuisine, there are several restaurants in Norway run by Austrians or that have Austrian chefs in the kitchen. We know a few, but would like tips on more!

Among other things, we can recommend “Sydvesten” in Helgeroa. Always good food, and probably Norway’s best Schnitzel,

If you have any questions about food or drink, please ask us on our facebook page.

We use cookies on our website to give you the most relevant experience by remembering your preferences and repeat visits. By clicking “Accept”, you consent to the use of ALL the cookies.
Cookie settingsACCEPT
Manage consent

This website uses cookies to improve your experience while you navigate through the website. Out of these, the cookies that are categorized as necessary are stored on your browser as they are essential for the working of basic functionalities of the website. We also use third-party cookies that help us analyze and understand how you use this website. These cookies will be stored in your browser only with your consent. You also have the option to opt-out of these cookies. But opting out of some of these cookies may affect your browsing experience.
SAVE & ACCEPT